Do you want to help us ensure that more families can be together this Christmas?

For so many end of life patients, it’s their greatest wish that they can receive the care they need at home and surrounded by the people they love. We want to make that wish a reality for more patients this Christmas.

When you support our Christmas Appeal, you’re giving more end of life patients the opportunity to have a say in their care, be with the ones they love and receive the specialist support they need. 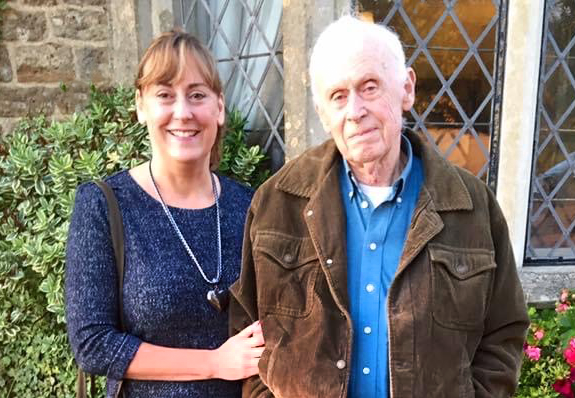 Select an amount to donate today

£30 can help to provide the support of a Dorothy House Nurse Specialist for 1 hour, who can make sure a family has all the support they need to care for their loved one at home.

£42 could help us provide 2 hours of support from an overnight carer in a patient’s home, allowing family members to rest in the knowledge that their loved one is in safe hands.

£65 can help to fund a Creative Therapies session, including art materials, at Winsley or online at home. This gives patients and those who are bereaved a focus and a way of expressing their feelings at such a difficult time.

When my husband Vic was diagnosed with stage 4 lung cancer at the age of 87, we had to face the devastating reality that palliative care was the only option. He was absolutely adamant about staying at home and thanks to Dorothy House, he could.

There’s no way I could have cared for Vic by myself. I knew cancer was an awful disease, but it was the first time I’d had to deal with it.

I’ll be forever thankful to Dorothy House that Vic got his wish to be at home. But I’m also incredibly grateful to you because Dorothy House can only offer care at home with your generous support.

Watching the life of someone you love slowly slip away is devastating, but Dorothy House was a tower of strength. They held my hand every step of the way.

Simon, our Dorothy House Nurse Specialist, was amazing. He put everything in place so Vic could be at home. He spoke to us truthfully and directly about what to expect and he gave me the Dorothy House 24hr Advice Line number so I could ring anytime for support.

As Vic’s condition deteriorated, he started hallucinating and shouting out during the night. That was when Simon arranged a Dorothy House night carer, which meant I could get some rest knowing he was in safe hands.

When Vic became too weak to move, Dorothy House carers came in to change his position and keep him comfortable. One of the carers, Andy, would put Vic’s hands in a bowl of warm water and flick water over them. Then he’d gently pat them dry with a towel. The way they looked after Vic in those last days and hours was so tender and dignified.

Vic died on a Thursday. I popped out to put the washing on the line and when I came back in, he’d stopped breathing. One minute he was here and the next he was gone. It was so peaceful.

The incredible thing about Dorothy House, is that they provided wonderful care for Vic, but were there for me as well.

Please support Dorothy House, so they can enable more families in our community to be together at home this Christmas.

I hope that you’ll be able to support this Appeal because Hospital just isn’t where many people, like Vic, want to be at the end of their life. Without Dorothy House, we wouldn’t have had any other choice.

Every day I got to kiss him good night and see him as soon as I woke up in the morning. His children would call in to see him and his grandchildren would jump up on the bed and give him a cuddle.

Dorothy House gave us dignity to the end of Vic’s life. By supporting them this Christmas, you can make it possible for more families to be together at home during their loved one’s final months and days.

Select an amount to donate today